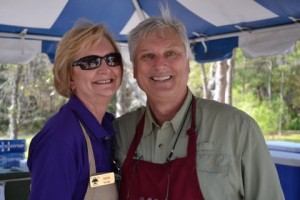 Family wine making began with Vicki’s ancestors from the south of France and was passed down to their Uncle Gifford, who continued the tradition. Every year Uncle Gifford made wine from “the old grapevines.” “The old grapevines” still thrive today and consist of four large vine arbors–two of the vines are over 150 years old and the other two are about 130 years old. The grapes from these vines were used to make the grape preserves sold at the shop.

Uncle Gifford was famous for his wine. Probably because he gave so much of it away to his friends and to the locals. The wooden barrel he made his wine in still exists and is displayed on the porch at the shop. Also on the porch is an antique spinning wheel used by Gifford’s parents to make cloth from cotton grown on the farm.  Gifford, bless his soul, passed away in 1993. He was 83. Our sweet red muscadine wine, Gifford’s Red, was named for this wonderful man and is reminiscent of the wine he enjoyed making.

After Gifford died, his home and approximately 38 acres went to Berta, who was Gifford’s sister and the mother of Vicki. Berta’s inheritance from Gifford was part of the same property originally settled by their parents in the 1800’s. Both Berta and Gifford were born and raised on the farm in the early 1900’s and Berta had returned to the farm in the 1980’s to help care for Gifford as his health declined. At the time of Gifford’s passing, it was clear to Vicki that Berta could no longer live by herself. Thus was the motivation for Vicki’s move from Houston, Texas to the farm in 1993 to help care for Berta.

The idea for La Belle Amie Vineyard was Vicki’s. In retrospect, there are some who believe that at the time she had this idea to start a vineyard that Vicki was experiencing an extreme and extended moment of insanity. Nonetheless, after her move to the farm in 1993 she began making La Belle Amie Vineyard a reality. By 1995 she had arranged for the clearing of fields and the planting of Vineyard #1.

In the spring of 1996, vineyard #2 was trellised and planted. Then came the hurricanes.

Hurricane Bertha was the first of five hurricanes to slam the vineyard over the four year period from 1996 to 1999. Bertha hit the vineyard in July 1996 and was only a category 1 hurricane. But Bertha was just a warm up for Hurricane Fran. Hurricane Fran, a category 3 hurricane, hit the vineyard in early September 1996 and devastated it. The result: replace broken support posts, repair trellis system and replant destroyed vines. However, given the massive destruction of Fran to the eastern U.S., we felt fairly fortunate.

Weatherwise, 1997 was uneventful . The vines continued to mature and the first grape harvest from Vineyard #1 occurred in September. It was a small harvest. Dividing vineyard costs by the number of bottles of wine produced, we estimated the cost to produce each bottle of wine at $2,500. Intuitively, we felt it may be just a little difficult to sell the 1997 vintage at cost. So we drank it.

The hurricanes were unkind to the vineyard the next two years. Hurricanes Bonnie and Daniel hit back to back in August and September of 1998.

In September 1999 Hurricane Floyd, a category 4 hurricane, also paid the vineyard a long and wet visit.

Thankfully, for the past several years the hurricane gods have smiled on La Belle Amie Vineyard and the last several grape harvests have been plentiful.  In March 2001 we planted Vineyard # 3 with hopes of increasing future harvests. The planting of Vineyard #3 was not a “thumbing our nose” gesture at Mother Nature. We know better.

With a Little Help From Our Friends

The success of any venture such as this is directly dependent on the unexpected contributions of others. Those who give their time, effort and expertise in the hope La Belle Amie Vineyard will succeed despite how crazy they believe our goals and dreams to be. To us, they are the Angels Of The Vineyard. Friends such as Donnie, and Hazel, and Danny, and Bob, and Genvieve, and Marlyn, and Marge and Fred. And the so many more. Angels we can never repay in kind and who will always hold a special place in our hearts. We feel compelled to succeed so as not to disappoint them.

Sadly, the person who was the motivation for Vicki’s relocation to the family farm is no longer with us. Berta passed away January 2002 on the farm she loved and came into this world on in 1906. But the beauty of the farm and vineyard she so dearly loved lives on. She would be quite pleased to know that this beauty is enjoyed by the thousands of visitors to La Belle Amie Vineyard each year. We hope you’re one of them.